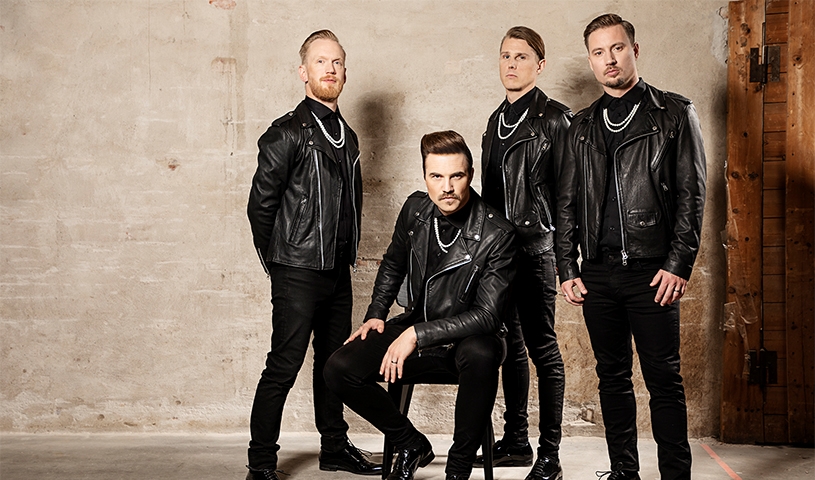 The world’s most eclectic rock band? Quite possibly. Since meeting at the Malmö Academy Of Music in 2007 – before making their first global waves with hit singles Tommy Gun and Full Steam Spacemachine – Royal Republic have cultivated an ‘anything goes’ spirit that flies in the face of genre labels. No boundaries, no limitations. They’ll give you sugared up disco one minute, and tear your face off with a bludgeoning thrash assault the next.

Backstage their collective DJ sets mix the Beatles, Cannibal Corpse, Steely Dan and the Backstreet Boys without batting an eyelid. If guitarist Hannes Irengård is in charge you’ll get Bob Dylan and Eminem. If bassist Jonas Almén is on the decks you’ll get Motörhead. That’s just the kind of band Royal Republic are.

“That was always the motto in a way,” singer/guitarist Adam Grahn explains. “But also we change our motto with every album. It’s always changing. I think that might be the core.”

Having swapped their prospective music teacher, session guy and (in drummer Per Andreasson’s case) symphony orchestra livelihoods for rock’n’roll, Royal Republic cut their teeth hurtling up and down Sweden in an old van, playing everywhere from ski cabins and empty youth clubs to awards shows alongside the likes of Biffy Clyro. All of which culminated with 2010 debut We Are The Royal, and the favourable attention of MTV and the charts.

From the beginning they’ve fired from all cylinders. As anyone who’s seen them live knows, there are no bookends in Royal Republic. Grahn might be the all-singing, moustache-twirling frontman, but charisma and king-sized chops are par for the course with all four of them. “The band was never about being virtuosic,” he reasons. “It’s more like being part of a machine. The sum is greater than its parts.”

2012’s Save The Nation was a comparatively moody, grungy change of pace and another chart hitter. It was also the unlikely birthplace of longtime acoustic favourite Addictive; immortalised on their Royal Republic & The Nosebreakers record (essentially a countrified tribute to themselves), in an immaculately operatic, harmonised manner of which the Four Tenors and Monty Python would be proud.

“I hated doing acoustic performances in the way I see a lot of rock bands do them,” Adam explains, “it’s like ‘ok, you peel away the guitars, cymbals and kick-ass settings and you’re left with this slow, soulless fucking strumming, and it just bothered the hell out of me.” The new, acoustic Addictive struck a chord with audiences and they’ve been playing it ever since. “But that’s fine!” Grahn beams. “I love making people happy. It’s the best thing I know. That’s why [2010 hit] Underwear is still in the setlist as well. I fucking hate Underwear…”

The real gear change, though, would be with 2016’s game-raising Weekend Man. Suddenly, dressed in snappy suits and armed with irresistible weapons-grade boogies, they were embracing their diverse mix of influences without trying to please any purists. Punchy, charisma-laden favourites like Walk, When I See You Dance With Another and Baby were born. The ensuing tour was a “giddy, blurry” affair; all sweaty sold-out shows, late nights and good-natured excess.

2019’s Club Majesty built on these foundations, and added a load of gleaming disco rock and sparkly jackets – bringing such glorious, not-guilty pleasures as Fireman & Dancer, Anna-Leigh and Boomerang to their musical cocktail. Metalheads and pop lovers alike rejoiced on an incendiary run of shows that culminated with a 6,000-strong crowd at Hamburg’s Sporthalle arena. It was rock’n’roll for the red carpet and the dance floor.

And not just groove. Whatever the record, when it comes to songwriting Royal Republic care about the little things. The sharpened edges, sweet spots and sprinkles of fairy dust that turn good songs into great songs. It’s an effortless sound born out of relentlessly high standards. Club Majesty single Fireman & Dancer – for which there were a grand total of 53 demo versions – is a case in point.

“I’m so fucking happy we didn’t let that one go too soon,” Adam sighs now, “I cried when it was released. It felt like a million bucks. I don’t know if it’s poetry on any level, but the energy was there, and the good vibes, and the saxophone solo!”

To really understand Royal Republic, it helps to go back to their roots. All of them grew up in households with hardcore music fans and eclectic record collections. Grahn’s parents were musicians – with tastes spanning classic soul, the Beatles and Tom Petty – and his childhood was punctuated by weekends spent watching their gigs. But it was two Metallica concerts on TV that changed everything.

“It was just so…” he searches for the words, “it’s what I was lacking at the time, it was so fucking confident. I was watching these guys walking around spitting and shouting and screaming and it was just ‘wow’. I’d always listened to music and heard music and played music, but how you look when you’re doing it… I never really saw that before.”

If there’s one thing Royal Republic’s shows don’t lack, it’s confidence. And even in their glitziest and shiniest moments, that raw, fearsome energy still comes out in all they do. It’s this combination of balls-to-the-wall rock, precision-honed technique and tearaway fun that makes them one of rock’n’roll’s most watchable acts.

Whoever you are, whatever your taste, Royal Republic welcome you with open arms. And whatever they do next, you can bet it’ll be a hell of a ride...